VaMoving out of Vancouver had never crossed my mind when I came to Hornby Island for a few days to attend the BluesFest in May 2018. In fact it was the farthest thing from my mind. But I caught the magic of Hornby Island.

Last night at a movie at the community center, a gentleman came up to me apologise for shouting at me when I backed into his car in the parking lot last week. The incident was so out of character for people on Hornby Island that it really threw me off-balance. Everyone has been so kind and friendly here, it is a startling contrast to Vancouver. I feel like I have gone to a different country or planet.

It is like a dream. I went for walk today and everyone says good morning or HI. Try that in Vancouver!

When I come over for the BluesFest in May I was struck by how many baby boomers there were here. So many people had gray hair and were of my generation. The island residents are a mix of hippies from the 60’s and 70’s, people from Vancouver with summer cottages, artists and summer visitors. Some have lived here all their life or a large part of it. I have met more people here than I have in 40 years in Vancouver. The friendliness is on a par with what I experienced as a child in the Maritimes.   I have been touched so many times.

The first week I arrived here I met a fellow blogger living Parksville that I had not met before. She moved to Parksville 2 years ago from Beijing where she had worked as a school administrator. We had many things to talk about. Her experience in China was interesting to me as I am teaching English online to students in China. We shared our blogging experiences and her experience with relocating and retiring. We had so much to talk about we arranged for a follow up lunch at her place.

Another fascinating person I met is the woman across the street teaching English as a second language online to students in Taiwan. She has been doing this for about 10 years… really before on-line teaching took off in a big way. Her business targets adult s, many of whom are still her students 10 years later. She teaches students early in the morning due to the time zone differences while I teach children in the evening. She was interested in my use of technology and my rates of pay! And I found a walking partner who lives across the street in Hornby and near me in Vancouver!

I was also invited the a Womens’ Wednesday cocktail hour, a fundraising event and have enjoyed the movies at the community center which are similar in calibre to the Vancouver International Film Festival. One of the most memorable events I attended was the one man show by singer and story-teller John Mclaughlan who did a personal look back at his life on Hornby. 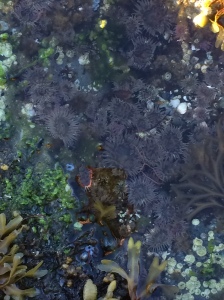 I had a struggle to find a place with a good wi-fi connection for using the teaching software for online teaching. But here again 5 people stepped up and offered me their home for a 3 1/2 hr session 3 x a week. Finally I found an office with good wi-fi where I could settle down and do my online teaching. Many thanks to the people who offered their spaces and to the business center that offered their space on an ongoing basis.

All this spirit of good will has caused me to reflect on my life in Vancouver and how unsatisfying it feels. It is not something I was conscious of until I got out-of-town. I lived in Ottawa for a couple of years and I felt the difference there as well. So as I have spent time here, I wonder about moving out of Vancouver. I recall a recent story about the differences in happiness by geography in Canada. However the survey found that variables affecting life satisfaction were not specific to geography but to gender, income, education, health status and to whether you knew your neighbours. Clearly knowing your neighbours is about the only modifiable variable at this point in my life. Vancouver ranked at the bottom on the life satisfaction scale but this would seem to be a function of the demographics of the population, with slightly lower life satisfaction among immigrants. So if one is to move to improve life satisfaction, the one variable that might have an impact is moving to a place where you are likely to know your neighbours.   Clearly Donna from RetirementReflections found a place where she knows her neighbours in Parksville and seems pretty happy with her choice. She joined a Newcomers group that appeared to make the transition easier. 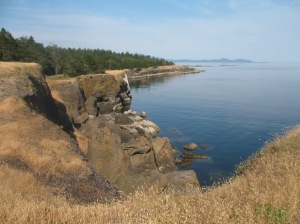 Clearly knowing your neighbours in Hornby is easier than in Vancouver. And probably easier in any small place in Canada.   But statistics don’t capture the personal, emotional and financial aspects of moving.

Much has been written about moving in retirement.. pros and cons, how to, where to, best cities. More fundamental is why more? Why pull up stakes were you are living to move someplace else? Lots of people have family reasons. e.g. to be closer to children or aging parents. For some people it offers a chance to cash in on real estate or downsize. A recent article in the Vancouver Sun reported on the Exodus of Vancouverites to the promised land driving up prices on Vancouver Island. And it is not just retirees moving but young couple with families. Clearly one can make a business case for moving out of Vancouver.

While Vancouver is spectacular, Hornby is more spectacular. Hiking trails and beaches are a five-minute drive from just about anywhere.   I am loving the lack of traffic, free parking and the COOP radio. Others have compared the cost of living in rural vs urban areas but that is related to circumstances. There are differences in the cost of living in cities in BC with Vancouver being the most expensive and Abbotsford the least expensive with Nanaimo in the middle. The major downside of Hornby is that it is a 2 hour commute to the nearest city via 2 ferries that sometimes have line ups in the summer so you can’t always be guaranteed a spot on the boat when you want it.

So the question dear readers is.. move out of Vancouver? to Hornby?

My next post will include details about day-to-day life on Hornby.

2 thoughts on “Vancouver to Hornby -The Kindness of Friends”